As I go into my fourth post-university year (and indeed, post-seventeen-straight-years-of-education-of-any-kind), it’s quite clear that 2018 has been my most productive yet.

Most of the achievements I’m about to list have already been detailed on the Portfolio page, but allow me to roll around in my productivity a little bit.

In March, I performed as a featured poet at the South Coast Writers Centre’s International Women’s Day, which was my first gig as a performing poet outside of Enough Said Poetry Slam.

In May, I published my zine Equidistant, illustrated by Sydney artist Erin O’Brien. I had so much fun creating a collaborative project with drawings based on my short poems, and have since sold several dozen copies online, to friends, and at numerous poetry slams. 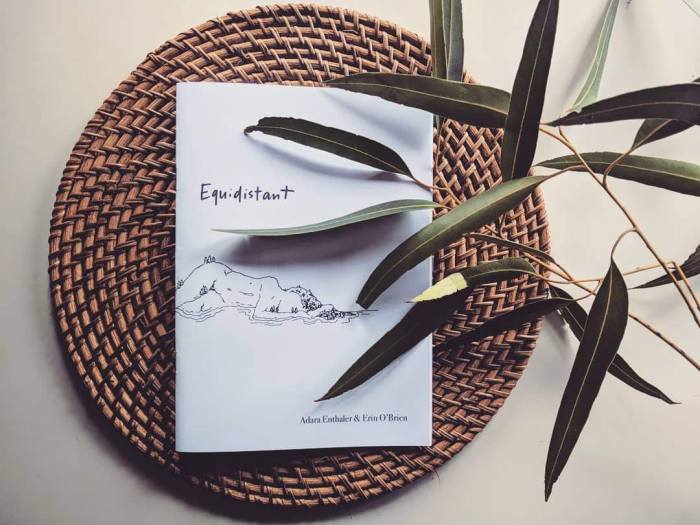 I continued to write more poetry than ever before and performed in the Enough Said open mic throughout the year as they bounced around different venues in Wollongong following the closure of Jane’s Cafe. I placed 2nd twice, receiving the special prize of a personal poem written during the slam by the amazing Emily Crocker using prompts from the crowd.

In October, I was invited to do performance and typewriter poetry in the Local Tent at Yours & Owls Music Festival. This was a hugely fun gig, and I loved tapping out spontaneous 5-minute poems for pinging festival patrons, even knowing they’d probably get used to wipe up gozleme grease or get crushed in a mosh.

In November, I performed as a solo poet and in a group at Enough Said’s last event of the year, as part of the Wollongong Writers Festival. It was my first time writing a poem with other people, and I was blown away by how constructive and communicative Zoe, John and Jamilla were. We scored the highest of all the group projects, and I couldn’t be prouder of us and what we created.

In 2018 was the very first Heroines Fest; a small writers festivals for sharing stories of women, both historical and speculative, run by Dr Sarah Nicholson of The Neo Perennial Press. They also published an anthology. I volunteered on the day to help run ticketing and mic running for the events, and was also invited to read some of my poetry in the closing part of the festival.

Finding work in Sydney for the first time, I commuted for six weeks to The Rocks to work as the Social Media & Marketing Officer for Word Travels—the International Performing Writers Association—leading up to the Australian Poetry Slam, as part of the Story-Fest ’18 weekend. It was an intense time of hiring interns, pitching radio marketing campaigns and working late hours, then a flurry of event volunteering during the festival itself.

Another new festival for me was the Feminist Writers Festival, which was in Sydney for the first time, in October of 2018. In the role of Volunteer Coordinator for the first time, I spent the two months preceding it involved in a lot of rostering and emailing, and was flat out for the duration of the festival, which was hosted by UTS. The organisers Emma and Nikki were wonderful to work with, and whilst I was exhausted by the end of it, it was a very rewarding experience. 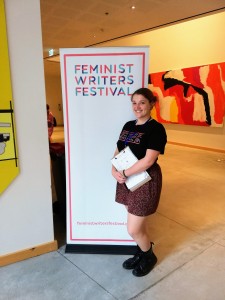 This isn’t even everything I did in 2018, but it’s a snapshot of the things I’m most proud of. Writing this blog reminds me that it’s important to keep track of your achievements to avoid feeling unaccomplished. Being a creator and not working full-time often leads to feeling like I don’t do much of anything at all, but of course that isn’t true.

I’ll be remembering this as I go into 2019, and looking out for the next slew of opportunities to test my abilities, collaborate with new people, and do new things I can be just as proud of.

At the 2017 July monthly Enough Said Poetry Slam in Wollongong, I finally and triumphantly ticked something off my hypothetical bucket list: I performed an original poem at a poetry slam!

Please excuse the exclamation mark, I’m not often one for grammatical expressions of enthusiasm. However, given the years it has taken me to finally write a poem I’m pleased with and find the inner stones to get up behind the open mic, I couldn’t be prouder of myself.

Enough Said Poetry Slam has been running for five years now, and it was on their fifth birthday event that I chose to share my poetry. I was nervous beyond belief, and although I had the poem memorised, my mind was so rattled that I knew some bits would fall out, so I wrote it down and read from the page. I stopped looking at the pages about a quarter of the way in, as I gained confidence and passion in my words.

The poem itself is vulnerable, enraged, and at times humorous, and whilst I performed it I could hear the audience clicking their fingers at the lines I was most proud of, and laughing, ‘awwing’, or murmuring approval. Just as when I read my fiction at Franks Wild Years, it was so gratifying to experience positive reactions to my writing in real time.

When the poem was done, I left the stage to thunderous applause, and I couldn’t contain my squeal of delight when the scores were announced. Ultimately, I came third (I lost points for going over the time limit, no regrets), but I was most honoured by the people who came up to me after the open mic section ended, and told me how much they loved my poem, and appreciated me sharing it with them. It was the best possible reaction I could have received to something personal that I created and shared, and the memory of that first performance will conjure a smile and a warm feeling for years to come.

A week ago, I got off a plane from New Zealand, after spending three weeks backpacking around the country.

Before you ask how this has anything to do with writing, or if I just want to brag about finally leaving my country, technically any changing experience is relevant to my writing, especially since most of my arguably best writing is about powerful personal experiences. There, justification made, let’s talk about travel.

The most valuable thing I learned in New Zealand (which I hope doesn’t fade from mind over the months back home) is that people can be trusted. So many warnings from friends and family before I left for my first overseas trip were to be careful. This isn’t unusual, being that I live in a society where every walk home at night is a threat to my personal safety. But I took heed of their warnings with a touch of resignation, as their advised safety restrictions closed away opportunities for risk or excitement.

Ultimately, I weighed up opportunity against chance, and I did take risks. I hitchhiked, I slept in a rental car on a lakeshore, accepted offers of meals and beds to sleep in, went swimming in hot pools with foreign men, and many other things that made my mother wince when I recounted them safely at home. I was rewarded for my risk-taking not only with free food and lifts, but with experience. I met more kiwis and travellers than I ever would have by travelling ‘safely’, I learned about less-visited towns and explored quiet lakes, and learned how to navigate a strange country without always googling the answer.

We live in suspicious times, but I was fortunate enough to learn that people won’t always disappoint you. Sometimes people will go out of their way to help a stranger, for no reason other than that they wanted to help.

Of course, I wasn’t always meeting new people or hiking up and down mountains. I both read and wrote during my travels, though neither as much as I would have liked. I took with me a hardback copy of The Hobbit (because of course I did), and a journal. I haven’t tried to journal since I was nine years old and bored myself with the recounting of my school days. When you spend every lunchtime reading your way through the library, there isn’t very much to remember.

But knowing that I should make an effort to write when I had taken three weeks off from normal life, I dutifully took my blue journal that someone gave me a few years ago (I have a shameful stack of blank gifted journals, too lovely for my absent scrawlings). With the exception of an unexpected song and a short poem, only time will tell if my journalling was in any way useful to my future writing.

Coming back to The Hobbit for a moment, as a Tolkien fan, I couldn’t help but appreciate why the Lord of the Rings films were shot in New Zealand, and wonder if perhaps J.R.R. Tolkien could have possibly taken a secret trip there before he started writing his masterpiece. As an Aussie who has spent her life on the coast, I was in a state of constant open-mouthed wonder on both islands of NZ, as I took in towering mountains topped with snow, misty glaciers, fiords, boiling thermal pools, and rolling green hills.

It’s a country that inspires not only trust, but an appreciation for the terrifying power of nature. I am fortunate to have been able to spend time there, and I’m excited beyond words for my future adventures, and the stories I’ll bring back with me. 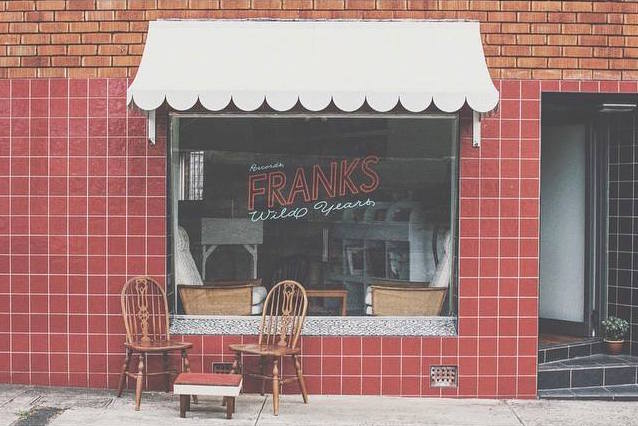 But in January of 2017, I finally stepped out of the comfort zone of being an audience member, and shared my writing publicly to a room of mostly strangers.

Franks Wild Years, a second-hand record shop and live venue in Thirroul, hosts weekly ‘Wednesdays at Franks’ events for music, poetry, stories, and live drawing. At their inaugural ‘A Night of Stories’, after listening to people read travel stories, original free prose, bush tales, and stories near and dear to the readers’ hearts, I stood up at the front of the small room to perform last. I balanced on a tall stool and read aloud from my laptop balanced on my knee.

I expected to be nervous. I was. I expected my voice to crack. It did, a little. But it hadn’t occurred to me that I would actually enjoy performing my work.

The small room received my voice without echo, and after a minute of finding my sound, I settled into the rhythm of my story. In the lack of any sound other than what I made, I could see there were many pairs of eyes on me, but I felt that they were patient and interested, not expectant.

In the years since university workshopping classes, I had forgotten what it felt like to be able to experience real-time reactions to what I create. I could hear the quiet nose-laughs when I read a sly joke, and the audible chuckles during humorous dialogue. There were slight gasps and hissing sounds when the story took a dark turn, and upon reading the final line, there was a collective murmur of “whoah”.

My story – The Deep End – is not a classic piece of literature for the ages, but it is one of my best pieces of fiction so far, and certainly one that I have spent the most time on. It was pleasantly gratifying to see/feel/hear it be received in the way that I wanted to present it.

Writing can be isolating, and until enough people read and hear your story, one of the most nerve-wracking thoughts you can have throughout the entire process is will they get it? Is this good enough? People who write for themselves don’t care if every person who reads it understands it, or sees every layer that they wrote.

But I write because I want to share stories with people; I want to make connections. And at Franks Wild Years, I did.